“Is it that a tiny crime can be wiped out by thousands of good deeds? For one life, thousands would be saved from corruption and decay.”

Can a murder in the battlefield be compared to a murder in a normal regular life, for necessity?

Is it that the act of murder by Napoleon on the battlefield be equivalent to a murder of an old, rich, spiteful pawnbroker who has no family, by an impoverished, needy student?

Crime and Punishment is a philosophical and psychological analysis from the perspective of a young ex-law student, Raskolnikov (Ras-kol-ni-kov) in St. Petersberg who is living in abject conditions. On one hand, due to paucity of funds he is neither able to pay is college fee (and hence is suspended from college) nor is he able to afford food; he hasn’t talked to anyone for about six month. He has started to pledge the little precious possessions he is left with, (like his father’s silver watch) to an old, rich, spiteful pawnbroker.

On the other hand, his mother and sister are equally vulnerable, living in countryside, harassed by moneylenders and employers. Raskolnikov is helpless and desperate. He thinks he is being punished for a crime he didn’t even commit. Due to his terrible circumstances he is pushed to a philosophical dilemma.

Crime and Punishment has been philosophically influenced by the ideas of Kant, Hegel’s Extraordinary man’s theory; Utalitarian thought of John Stuart Mill, Jeremy Bentham and William Godwin and Russian nihilism.

While Hegel’s Extraordinary man’s theory states, the superior man would not be the product of long evolution, rather, he would emerge when any man with superior potential completely masters and strikes off conventional christian “herd mentality” to create his own values, which are completey rooted in life on Earth. (Didn’t understand? Read on)

Well, Raskolnikov believes that there are some great men who are not bound by law. And their idea for the betterment of society requires them to break the law. Such men are necessary till we build a better society. Clearly, he is deprived, wants a better future and has lost faith in God. He is sick of his helplessness and takes charge of it. He wants a revolution.

In other words, there are two kinds of men (persons) ordinary and extraordinary. Where ordinary man (person) is submissive and accepts his/her fate and accepts suffering, while on the other hand, an extraordinary man has a right, not an official one, but an inner one to decide in his own conscience to overstep, certain obstancles, and only in case it is essential for the practical fulfillment o fthe idea (sometimes perhaps, of benefit to the whole humanity)

Raskolnikov combined these two philosophies of utalitarianism and Extraordinary man’s theory and decided to murder the old, rich, spiteful pawnbroker.

Raskolnikov committed the murder before fully analysing the theories. He is now left with two options,

Fyodor Dostoevsky is one of the greatest authors of all times. Born and brought up in Moscow, Dostoevsky’s life was equally dark and dramatic as his novels. His father was murdered by pouring vodka down his throat until he strangled, while he was imprisoned for alledged subversion against Tsar Niclar I, where he was given silent treatent for eight months, and he miraculously escaped a death sentence.

Dostoevsky’s life significantly contributed to his writing and plot. For instance, while writing Crime and Punishment, he owed large sums of money to the creditors and was trying to help his family as well.

It has been extremely difficult for me to reach a conclusion. Firstly, this book proves that it is impossible categorize  anything as right or wrong. One cannot really divide humanity into innocent and guilty, or good and bad, or victim and predeator. One cannot afford to take sides if one wants to lead a virtuous life. Until the very end, I was not ready to accept that Raskolnikov is a criminal (in fact I’m still not completely convinved)

Secondly, and importantly we always think that heaven and hell are two places. Heaven is above stratosphere, where beautiful angles and gods reside playing harp and there is peace. whereas, Hell is somewhere close to the core of the Earth where devil lives and puts one in a tub of boiling oil and suffering has no end. The book indicates that heaven and hell are not in stratosphere or core of the Earth respectively, instead it is right here. Heaven could be, having mental peace, resilience, healthy mind, body and soul; while Hell could be guilt, anger and ignorance.

Whatever justification one has for any act, if our conscience doesn’t permit us, we cannot escape it. Raskolnikov in the present case, could run away to escape him punishment, but psychologically he is unable to escape. His punishment is his guilt which will not let him be in peace.

Thirdly, the book is a shining example of how with love one can escape the greatest sorrows and sufferings.

Fourthly, and very importantly, this book taught me that situations change. And in difficult times one mustn’t take drastic steps without thinking it through. (You’ll realize this after reading the book)

Fifthly, this one of the most powerful novels I’ve ever read. It’s an essential read. 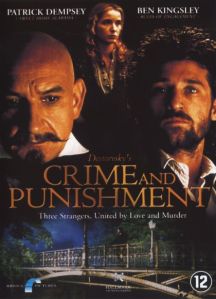 Crime and Punishment has been adapted into several movies, plays, TV series, etc. However, there is this particular adaptation, a “television” film released in 1998 which I liked the most, Directed by Joseph Sargent, starring Patrick Dempsey, Ben Kingsley and Julie Delpy. It was very hard to get hold of this particular film. The film plot is very closely related to the book with minor changes. It’s a very well directed movie, and I specially liked the accent adapted by each and every actor. But it might not make a good impact on you if you haven’t read the book, so, I’d say, first read and then watch.

I kindly request my readers to help me out a little here. As mentioned above, I’ve not been able to completely convince myself that Raskolnikov is a criminal. Well if you could just help me with this ideological dilemma, and help me understand why he is a criminal (or how his ideology was wrong) I’d be very grateful to you. Not to forget, his ideology is inspired by some of the greatest thinker of all times, so this will require a little extra thinking. Thanks 😀

If you enjoyed reading it, don’t forget to share it amongst like minded people and if you want to say anything to me, don’t hesistate to write to me. Your opinions, criticism and thoughts are always welcome. Bye Bye!

One Reply to “Crime and Punishment”