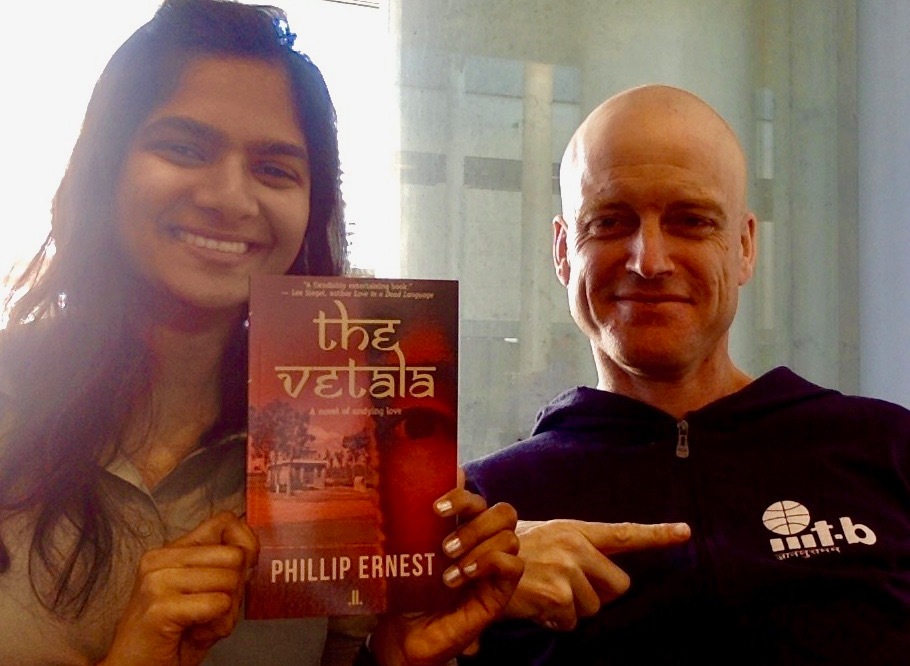 Seldom do I choose books which I can read in a couple of days. Being a slow and immersive reader with “heavy” preferences, it is less likely that I stumble across easy reads; and vampire fiction is far from it. In addition to that, I repel even remotely spooky stuff. Clearly I made an exception when I picked this book up. 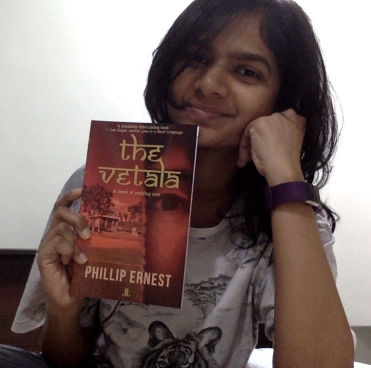 The Book or the Author?

Let’s get to the “whys” now. Why did I pick this book then? (Drumroll please!) because of the author. The author, Phillip Ernest is a Canadian who grew up in a small town called New Liskeard in Northern Ontario. He learnt Sanskrit (an ancient Indian language similar to Latin and Greek) out of sheer interest and in fact went on to do a PhD in Sanskrit from Cambridge University.

I believe, a person who goes on to learn something new, with no previous family history of it, and excel in it, is extraordinary- an outlier itself. Not only this, he has gained such mastery on the language and understanding of the Indian culture that he wrote this book for the Indian audience, instead of foreign. This was one of the main reasons I picked this book up.

The title Vetala is a Sanskrit word which means a Vampire like supernatural being which is neither dead or alive. The book is based in Pune and the protagonist Nada is a foreign national, doing research on an ancient Indian (Sanskrit) literature (duh! hehe…) but is met with demonic-interventions and she must use her wit to resolve the mystery of the manuscript. Since I have lived in Pune (popularly called Oxford of the East- defintely a misnomer in my opinion) for my University education I can vouch for the fact that the describing of the city and it’s people is quite apt. (no spoilers here!)

The book is full of Sanskrit and Hindi (most popular Indian language) terminologies, with a not-so-long glossary at the back. Most Indians won’t need to use the glossary, however, it is essential for foreign readers.

At one point of time I was tempted to compare this book with other books in the same genre, and even Hindi films. But almost instantly I realized that, that would be huge mistake; just because I am so well acquainted with the Indian culture I was risking taking this work for granted. In reality this book is a result of in-depth knowledge of Indian folklore and beliefs. For instance, a common Indian belief of reincarnation (or re-birth) make a typical Indian more accepting of the present “sufferings”, which they believe is the result of their past life misdeeds. This belief, in fact, is the main premise of this book. This in-fact is one of the main reasons why Indians are generally more accepting of the “status-quo”.

Once again, it is a fairly easy read with a deep connection with Indian folklore and beliefs, which reminds me of stories I grew up listening to; they are spooky, fascinating and definitely entertaining. Moreover, because the book is written by an academician, not a screenplay writer, it has no flimsy content. 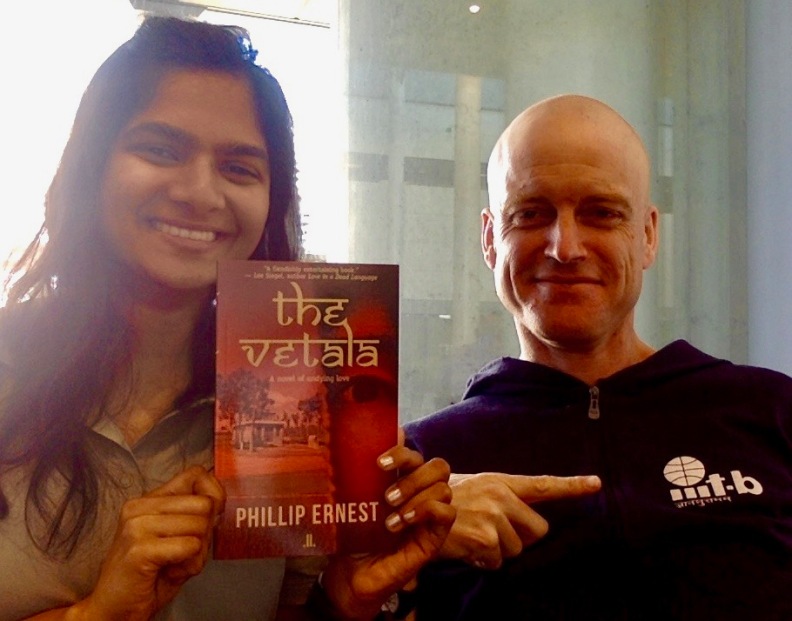 With Phillip Ernest, who also signed my copy in Hindi. He is pointing at the last two words of a Sanskrit shlock (from the famous Bhagwad Gita) written on his shirt, pronounced as- Gyanmutamam; which literally means “knowledge is the highest thing”

I was extremely fortunate to have gotten a chance to meet the author, Phillip Ernest. To my pleasant surprise he a very simple and down to earth person. He is a linguist, an intellectual, who believes that a dying language is one of the most tragic mishaps of contemporary times and is steadfastly devoted to keeping Sanskrit alive.

Death of a language is indeed quite tragic, as it is not only loss of the language itself but the concepts associated to it, the knowledge it contains, the philosophy it contains, the way of life, etc. Losing a language is like loosing a culture altogether and no economical parameter can equate such a loss in monetary terms. In fact, futurists predict that we are under the risk of loosing 3,000 minority languages in the next 10 years.

We are very lucky to have a few people like him who have such beliefs, as it is because of them that minority languages, might be preserved. Languages such as Sanskrit and even popularly used Hindi are under the risk of being completely engulfed by English language.

Yet it is unsurprisingly ironical that, such a person’s belief and noble intentions are not appreciated in India. Although Mr. Ernest who wrote this book for an Indian audience, it was not appreciated by a single publishing house in India until it was well received in his home country.

To sum up, the book is truly fascinating and sometimes bizarre, especially for a non-Indian, as it depicts common Hindu beliefs and folklore. It is definitely a page-turner. For me, the author and his motivation behind this work is more fascinating than the story itself; but for foreigners I think the content of the book would be more attractive.